When the Strong Arm of the Law is Lawless

When the Strong Arm of the Law is Lawless

When Inspector Mark Syce was dispatched to a property in Broadlands, Strand, in response to a complaint about a dog that had been shot, he wasn’t expecting the alleged perpetrator of cruelty to be an individual who had sworn to serve and protect.

Tyson, who had been shot by a uniformed member of South African Police Services, had already been taken to AWS Gordon’s Bay in a desperate bid to save his life and so Inspector Syce, proceeded to inspect the property and interview the witnesses.

Here is Inspector Marks account of the interview with Tyson’s owner: “Tyson was in our garden watching my Father, who was sweeping the curb through the fence when SAPS vehicles suddenly pulled up.  A policeman jumped out of one vehicle and immediately shot a rubber bullet through the gap in the fence.  The bullet struck Tyson in the throat. He then chased after Tyson, who had run to the back of the house and fired a few more rounds, one of which struck him on his back. The police then searched the house without a warrant in place.”

Inspector Syce, followed the trail of shell casings and rubber bullets on the ground, photographing and collecting the evidence as he went. 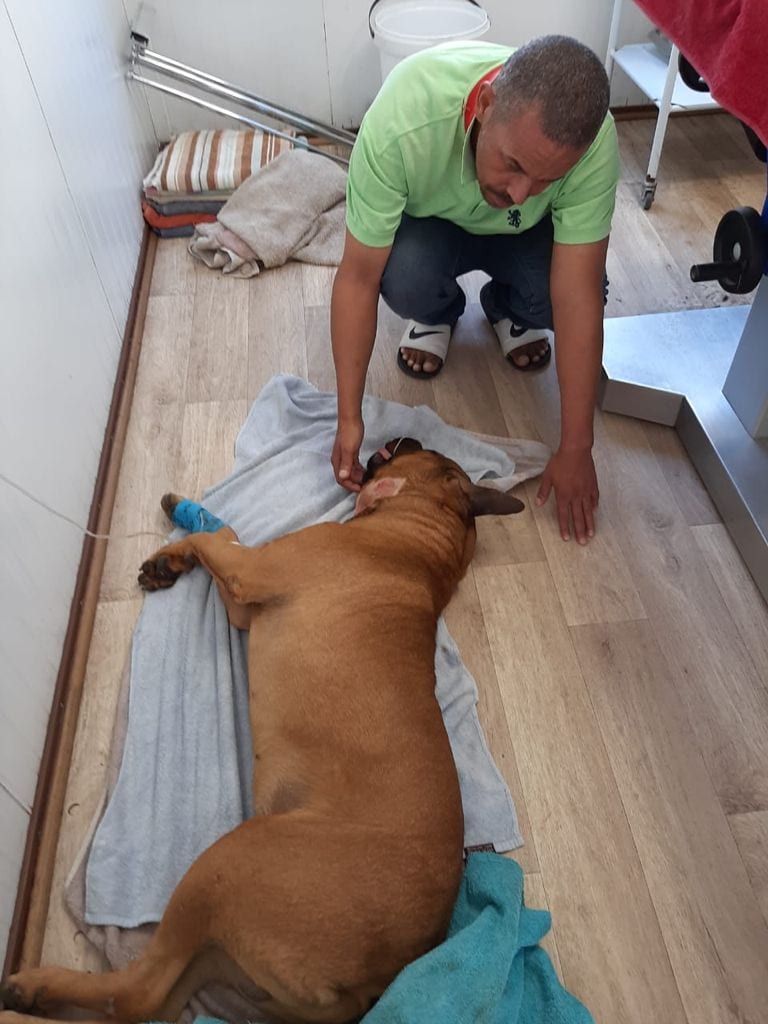 When the phone rang, Inspector Syce could see it was bad news.  Tyson’s injuries were fatal and the treating veterinarian was offering his owner the chance to say goodbye. Inspector Syce rushed him through to the AWS Gordon’s Bay facility where the Vet explained that Tyson was barely hanging on .

Tyson presented with severe trauma to the ventral neck area over the larynx. There was a +/- 8cm open wound that extended deep into the surrounding tissue.  The neck muscles were macerated, looked burnt and the trachea was exposed. There was a indication of air leakage from and bleeding into the trachea, a bruise on Tyson’s face and another smaller, open wound over his ribcage.  Given the extent of his injuries and the vet’s qualified opinion that Tyson would suffocate as a result of the swelling caused by the trauma once the endotracheal tube was removed, Tyson was put to sleep.  It was a traumatic goodbye to witness.

*The following images may be upsetting

A Promise To a Grieving Owner

“Cruelty to animals is always hard to witness, but somehow it is made so much worse when it is perpetrated by an individual who should be upholding the law and setting an example to others” says Inspector Mark Syce.  “I made a promise to Tyson’s owner that I will pursue this case and I won’t give up until justice is served”.  A docket has since been submitted to the local SAPS Office and our Inspector Syce looks forward to the day when he can represent Tyson in Court.

Help Us Keep Our Inspectors on the Road

Pursuing justice for animals is Priceless, but it does cost money!  Please keep our inspectors on the roads and in the court rooms with your donation made below: